Much as I admire the power of this art program, its simply overwhelming! I find that I can’t do what I want easily and yet I could do the same thing in Windows Paint, more or less!

I use a word processor ‘skin’ called Jarte that is a front end piggy backed on top of Wordpad. It just makes it easier to use and I wish there was a similar option for your admirable but overly complex program.

Please forgive me for saying this but my ideal art program was DeLuxe Paint 3 on the Amiga and I’d pay good money for a skin that sat atop your program and presented me with a much easier to use front end that resembled the latters appearance.

Its so frustrating to know that your program offers so much but is too damn hard to work out, requires user input that confuses me. If it only started with a simple screen of ‘paper’ with a few essential tool icons awaiting selection. Then I could at least make a start on producing an image easily and quickly. From that point on I would then doubtless be able to start investigating the many options and additional tools just waiting to be needed. 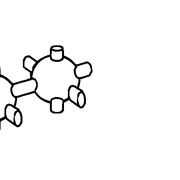 This is an example of what I couldn’t produce easily and had to use Paint to do instead. i wanted graduated fills and to animate the units joining up to make larger shapes but of course Paint cannot do that but your program could if I only knew how.

You sound a little frustrated, hehe. I feel your pain. When I decided to sit down and force myself to learn Pro Motion, I too had to ascend what felt like a pretty tough learning curve. Took me about a week to get remotely comfortable. Pro Motion is based on DPaint, which you mentioned. My main art app was always Photoshop, which is pretty different.

Now that I understand PMNG better, it’s pretty easy to work with, in my opinion. Have you tried reviewing a few of the videos? https://www.cosmigo.com/pixel_animation_software/learn/videos

Based on my experience with various complex Adobe software, I’d say PMNG’s learning curve is more or less on par with the scope of its feature set. There’s a lot going on.
Yes, the way some tools work is rather odd, but once you learn the quirks you begin to appreciate them (at least in my experience).

Jarte is cool. Hadn’t heard of it.
I would suspect that something like this simply isn’t possible in PMNG without a massive ui overhaul.
If some sort of 3rd party mod was created for PMNG to streamline its user interface, then it’s just something that should natively be done to PMNG to improve it.
Personally, I think the toolbar icons should be replaced with simpler, more modern ones. That would help new users and reduce ui noise.

Knowing what I know now about PMNG, I could take your molecule model looking image you included, and make the changes you stated in just a few minutes - a little volume shading and simple animation is no big deal.
(Though I’d use Photoshop for the job - no need for indexed color pixel art tools in this case.)