Creating balanced color palette it is quite a challenge, especially when linear ramping isn’t enough, then you have to adjust brightness, hue, saturation, all by hand and in most cases separately, it can take for ever to get nice contrast and ease between many colors.

I think it would improve creation of palettes a lot, if there were curve editors in palette generator / editor.
You could easily control ease of contrast / saturation, hue ranges - amounts of particular colors.

By Curve color editor, I mean something like RGB Curves in blender, I personally prefer working with HSV tho.

This is one my biggest pain points in PMNG - the inability to intelligently modify multiple colors at once in specific ways. There are some great color related tools in PMNG but none that let us apply specific tinting.
In Photoshop we can easily make these types of changes, with the myriad of color editing tools it’s got.

But PMNG doesn’t need all that. Just a curve editor like Gordrik suggests would be a huge step forward. 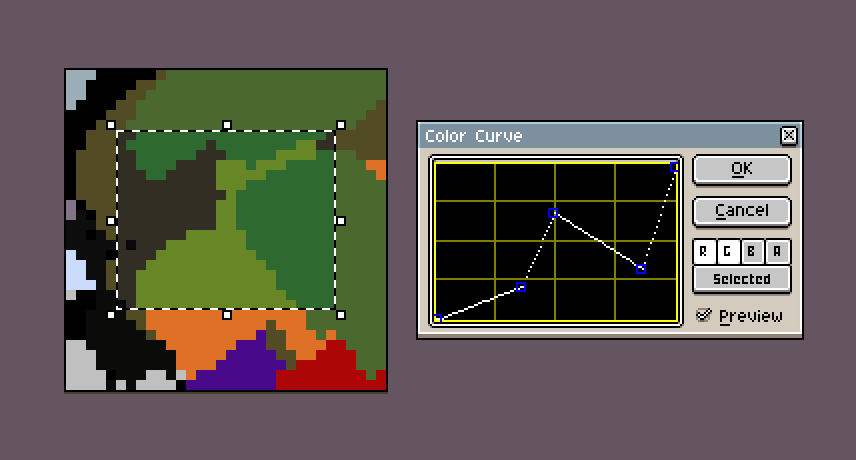 The curve editor’s power comes from its ability to affect any or all color channels in any part of the value range.
So if you want to to tint the shadows with some blue and the highlights with some yellow, you can do that.

Imagine needing to make such a change to the second row of colors in this palette, using PMNG: 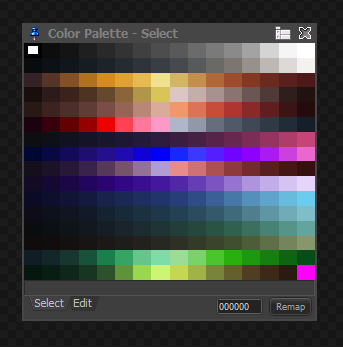 Right now, we can select that entire ramp and affect HSV as well as contrast all at once. But we can’t tell the shadows to be more blue and the highlights more yellow. To do that, meticulous editing of each color individually is required in order to implement a smooth color tinting effect.

Sorry if beating a dead horse, I know im just stating the obvious, but just want to lay it all out there so everyone involved here can be on the same page.

Now . . . I do have one big suggestion here, for PMNG. A palette edit toggle.

When applying a fancy color curve edit, sometimes you DON’T want to edit your palette colors. You just want to change how part of your image looks. So . . . this color curve idea could have a double usage - use it for making a permanent change to your palette -OR- just use it to alter part of your artwork, the final result being constrained to colors already in your palette. Such as when you merge down a layer when it’s using a blendmode - where PMNG has to quantize the blend result colors: 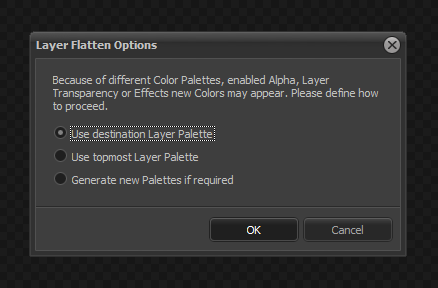 So, this edit palette toggle determines whether you’re actually changing your palette or just causing a palette constrained color edit to the current layer.
(btw if there was a toggle for blendmode using layers to have a live quantized preview that showed you in real-time what it would look like if you merged down that would be insanely useful to me)

I’m confident this type of color editing feature would be very welcome to a wide variety of PMNG users, not just large palette users like me.