How do I get the dark UI?

Hi,
just bought Pro Motion NG it’s really great but when I watched the tutorial videos on your youtube channel I realized that I don’t have the dark ui theme.

So, how do I switch from the light one to the dark ui?

please open the preferences (menu File/Preferences). Then activate this option: 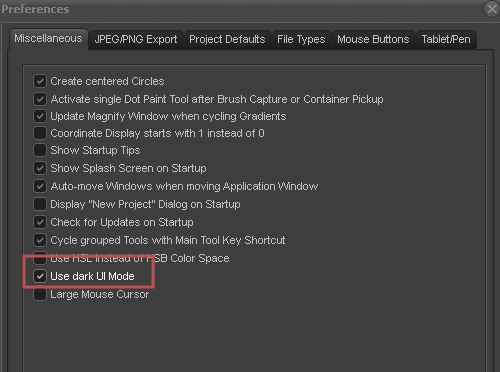 Ah! There it is, thank you. I was too blind to see it…

I like the dark UI, but not so much the white icons. The light theme has the disadvantage of too bright canvas color, which (depending on the palette of the current work) might alter the perception of colors, but the icons are more visual friendly. The dark theme has a cool canvas color, which is ideal to test bright color palettes.

Is it possible to customize the UI colors by editing some settings file? I think it would be cool to control the working environment background colors. Ideally 50% or 30% grey would offer a good contrast to choose colors, but depending on the monitor gamma bias one might choose other colors shades to compensate.

And can the icons be modified by changing the “icons*.png” files in NG install folder?

It would be nice if in the future PM NG would allow overriding theme colors and icons with custom settings in user folder (icon images included) so that they would survive app updates.

I’ll reduce the bright white outline of the icons. It was reported before that this is too bright.

Using the icon banks from the user’s folder would have the disadvantage that new icons would be missing then after an update, I think.

Will add “changing the UI colors” (at least in part) to the wish list, but I don’t know if this is possible at runtime. The skinning system is built into the UI-system I use and I (yet) did not find a way to change individual colors at runtime.