This suggestion feels a bit like sacrilege because Pro Motion’s ui icons have so much character and they’ve been with us for so long, but what if PM’s icons were revised to be simpler and more readable?
I think there’s a strong case to be made for improving PM’s overall user experience if the icon set currently in place was updated to more modern standards.

User interface theory and icon design are their own art form so this would require a pretty skilled hand. Would be quite a project.
But take a look at some of Photoshop’s simple silhouette greyscale icons, next to some of Pro Motion’s icons: 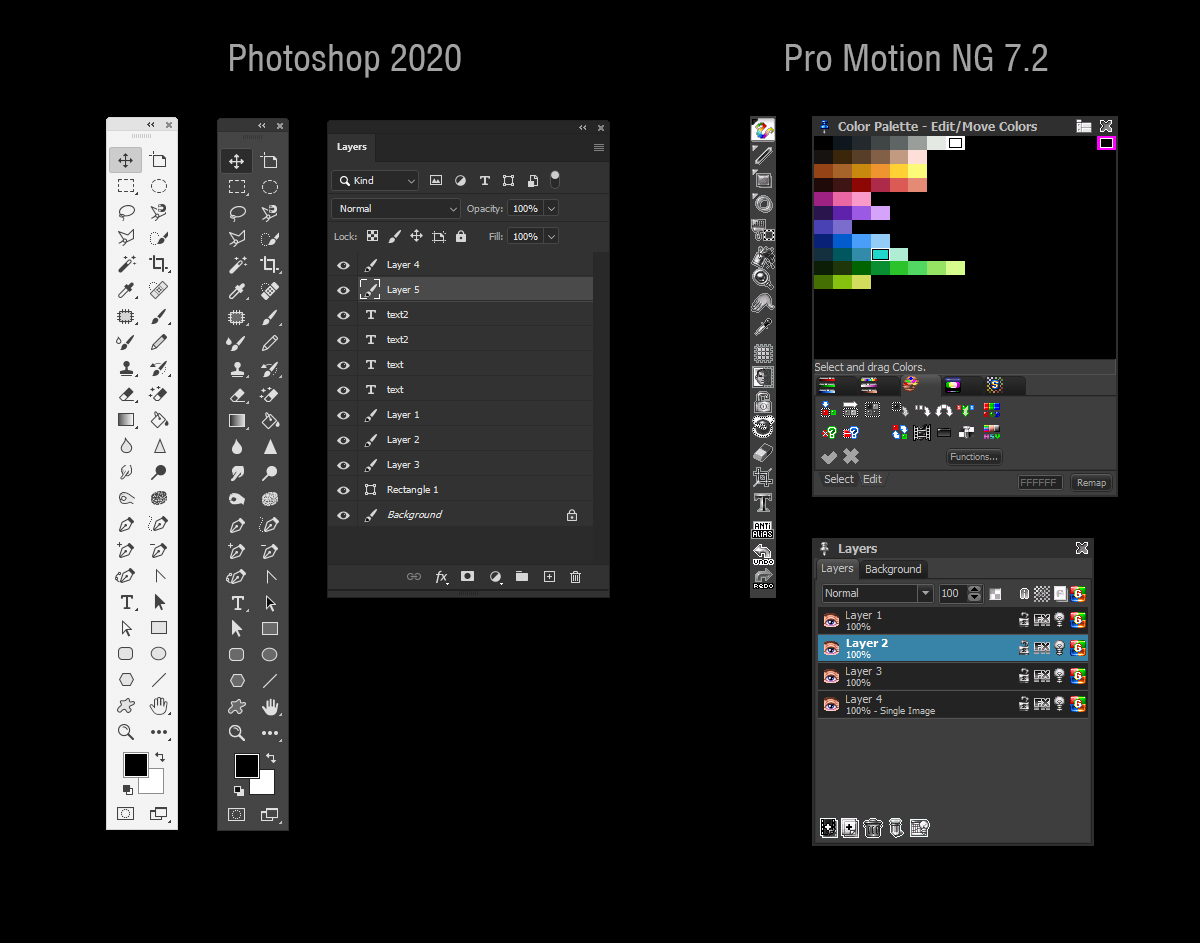 The right one looks better

I know what you mean and you are not the first one asking for this. Maybe along with the docking windows. Let’s see.

Hehe. Cool cool.
Well, not necessarily asking for it; just wanted to bring it up. You have much more important stuff to focus on.

But if you’re working on supporting different operating system DPI/ui scaling, it may affect icons. Might need them to scale up possibly, otherwise they may blur. Not sure . . .
I bet part of the reason a lot of modern software these days uses very simple icons is because they need to have multiple versions of every icon - multiple sizes, etc.

Just tested Photoshop at 200% ui scaling. Check out these big’uns:

I can tell they were drawn using pixel-snapped vectors. Something I’ve done quite a bit of myself.
A good choice when multiple sizes are needed.

Just got Pro Motion in Steam 2 days ago. It’s surprising that there’s not much talk about it, just found out about Pro Motion via a random youtube video in Spriter Pro.

Still learning about it’s tools especially the coloring aspect, as I’m new to pixel art and the concept of index colors. I’ve decided my first project is to redo some of the icons for my personal use and satisfaction until an official UI update release.

Attached are some of the icons I have redone so far. I hope I did not break any rule or license agreement for this

I’ll try these out. Nice work!

@jan.cosmigo If you’re interested in officially implementing new icons, please let me know.
One issue is obviously sustainability - what happens when you need a new icon and your icon artist is nowhere to be found? Woes of being a one-man-army like you are. And there’s other long-term issues to consider as well.

I strongly feel that PMNG’s ui must embrace modern software aesthetics, and it is (the new dark theme is amazing), but the icons have now fallen behind. I know that’s annoying to hear, and it’s only my opinion, but it’s true what @kusakos says - PMNG gets left out of the conversation a lot. Could the gui be partially responsible?

thanks for contributing some new icons. Thanks a lot.

@mathias
Icons will be changed in the future to be simpler and larger. But this won’t be with 7.3 I guess, but 7.4 I think (hope).
And along with docking windows there should be some more responsiveness, similar to what you can see in the “Tool & Paint Settings” when you change the window size. The option elements float their position.
The icons are created by a friend and at the moment he is quite busy.