If you’re not familiar with what a perspective guide is, it’s a little like this:

The lines serve as guides to aligning/arranging objects in 3D space (or a projection thereof) in art. Is there anything that offers similar functionality in Pro Motion NG (outside of using the layer FX to display a separate project in which you’ve hand-drawn the perspective guidelines?)

Well, there is no function specifically designed for this, but…

You can draw symmetric lines starting from a center with the symmetry tool.
Something that could work:

To better go off the canvas you can use different brush grip positions (menu Brush/Grip) and small zoom levels.
Involves a couple of steps, but could be better than hand draw every line.
Also you can save such images as templates for later use. 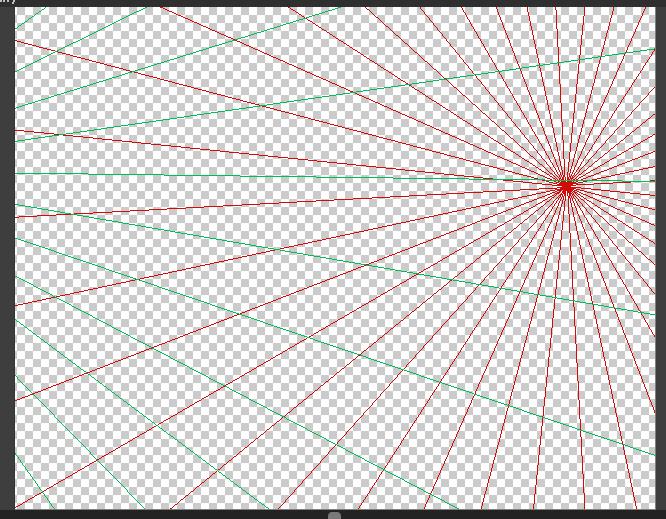 I like @EvanMWalter’s idea. I’ve seen similar prospective guide in Manga Studio and they are quite cool (and well implemented). Here’s a video of how Manga Studio implements them:

I also think that the whole purpose of these guide would be to be able to readjust them via draggable handles, save presets, etc. Also, instead of being in pixel-art styled lines (i.e. with grainy square when zoomed) they should be “vector style” lines, a sort of GUI overlay that is not part of the actual image and that remains in thin lines regardless of the zoom level.

Indeed, for those who wish to draw 3D pixel art this would be a great feature.

My post was only meant to be a workaround for a (yet) not existing feature. One day it might find the way into PM. I also want to redo the current grid system and maybe this can be combined then.