I just discovered that “Scale factor” has an upper limit of 10. 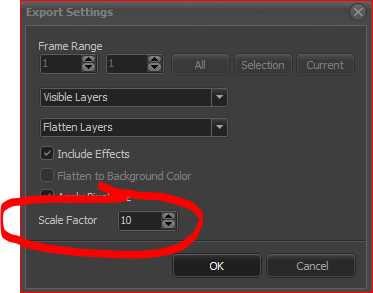 I happen to work on an image where i need more than twice of that upper limit because it will be for printing. And i can’t print from PMNG directly too. Because i don’t have the printing machine capable of printing an image of that size.

An indirect workaround i have for now is using other program(s) to scale the image. But as much as possible, i want to avoid doing that because it brings a different set of issues in and on itself.

Would not be a problem but if it’s only for printing then please try first to print into a PDF which is a default printer from Microsoft as of Win10 (or even earlier). Would that work?

Oh man. It’s actually a good suggestion but it still wouldn’t work because the printing shop the client hired seems to require an image file from them.

It’s fine now, I’ve successfully scaled the image in another program. But I’m pretty sure I’ll be doing this same type of work again in the future.