Hello, I have a question that can PMNG export a sprite sheet to some single images?
I know that PMNG can use “File- Animation- Save as single Images…” for animation projects.
But I didn’t find a way for Sprite sheet.

just load the Sprite Sheet file using “Load Animation”. Then use the function you mentioned to store it into single frames.

*EDIT - I didn’t notice Jan’s response before posting mine. Let us know if your question got answered or not.

Are you wanting to specify a directory of image files for PMNG to pack into one spritesheet image?
Like this packer tool does? - 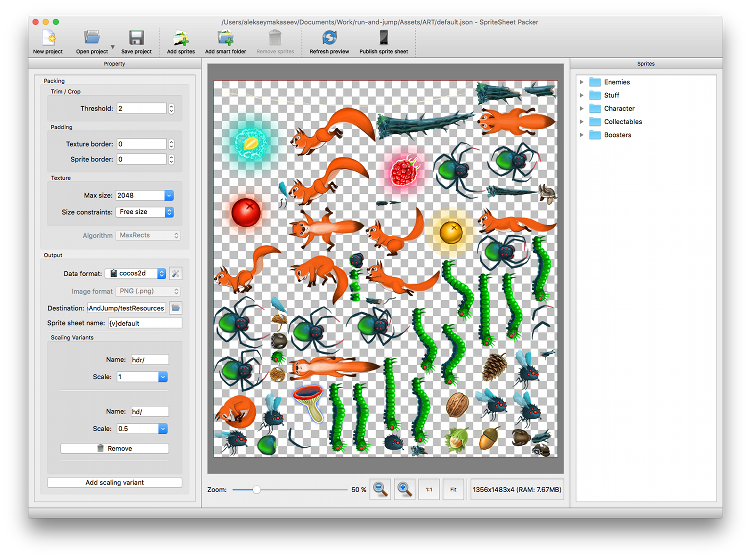 You start with a folder full of images and end up with one large spritesheet image, like this: 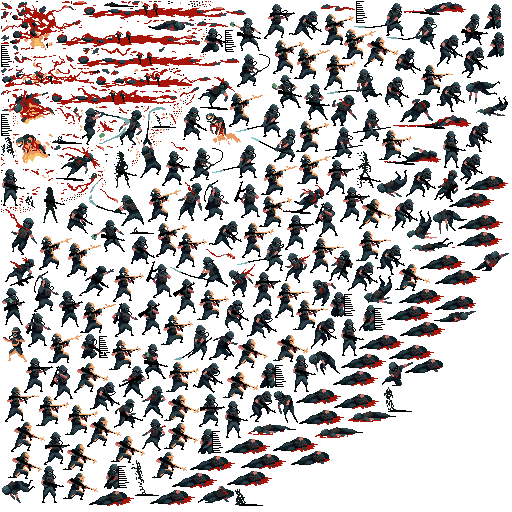 A secondary utility function like this I wouldn’t expect to be found in PMNG.
Even Photoshop doesn’t natively offer a feature like this.
The thing with spritesheet packing is there needs to be a lot of settings available to control the resultant spritesheet image. Not a simple feature to develop, which is why there are programs out there that do only sheet packing.

Am I understanding your question?

The answer I gave referred to a sprite sheet that uses fixed positions of the single frames such as this one:

You can load a sprite sheet from BMP and PNG files with File/Load Animation. You must then give how many rows and columns of the frames there are.

Then you have a “normal” animation and can export it into single images.

Sprite Sheets as shown by @mathias can not be loaded directly.

Whenever this comes up, I find it’s helpful to understand the difference between a “spritesheet” and a “texture atlas” - https://gamedev.stackexchange.com/questions/69895/what-is-the-difference-between-a-sprite-sheet-and-a-texture-atlas/69898

Both are technically the same thing - a single image encapsulating many smaller images. Difference is in how they’re used.

At this time, PMNG only deals with spritesheets where each contained image has the same dimensions and are all spaced apart by the same increment.

Thank you, guys!
I think it is because I don’t know the “Load Animation”, I will try it. I will read more about what mathias said. But the game engine (Clickteam Fusion) I use is just simple. It just needs single images to make a sprite object. So the sprite sheet/single Images with fixed positions is well.