Greetings all! I just recently picked up Pro Motion NG after watching this YouTube video:


I know this video is a bit out of date, and appears to use an older version of Pro Motion, but I assume that the latest version has similar features, so I’ll keep my question(s) based on that assumption.
The trouble I have is that I wish to begin designing tilesets based (for now) on repeating tile patterns, just like this video.
I have currently begun a tile pattern using the enable pattern drawing under the processing tab. So far, I am getting the results I am mostly looking for in a 3x3 grid. This, of course, only works in ‘normal’ mode, not within the tilemap mode.
However, once the basic pattern is down, I am going to want to adjust the borders, and shadows of the ‘edge’ tiles, as seen in the aforementioned video. I guess I’m just at a loss as to how this person is working the program itself.
What I am confused about is how the user in the video is achieving the updating of different tiles based on the pattern she is currently editing. I’m sure I’m not using the right terminology right now, but I hope I’m getting my confusion across.
At no point does the video show any part of the interface, and the work flow within the program itself and I’m looking for a starting point that may help lead me in the right direction.
If any more information is needed I would be happy to post screenshots of what I’m working on at the moment for better understanding.
I would LOVE to hear from you guys who have been working with this program.
Take care, and I hope to be able to help someone, and contribute to this community in the future when I am more experienced!
mathias 2020-08-30 03:15:24 UTC #2

Did someone say T I L I N G.
hrrmMm old threeeaaaddddddd

Agnes Heyer, who goes by (or used to go by) Arachne, put this video out some years and it was pretty handy back then, and still is. But yeah, no ui shown. Guess she was only trying to convey tiling techniques regardless of the software.

At this point I’ve gotten a really solid handle on PMNG’s tiling stuff - I can probably answer all your questions. Got it all figured out yet?

Two awful way-too-long recordings of myself working on some tiles I randomly recorded one day when I was feeling kewl (with kewl music included):


^These are probably more confusing than helpful; not tutorials, just random recordings.

Ask away, my child.

Fantasic. I’ll definitely have a look. Part of why I found that first video helpful was because I am planning on using the Tilesetter software to help auto generate blob, and wang tilesets to be used with the autotiling feature of Game Maker Studio 2. I find the lay out of each tile piece rather obtuse, and while I’m sure there’ some sort of logic behind it, I can’t wrap my head around it, so Tilesetter is a GREAT tool.
So being able to generate a simple 9-tile starting place would be helpful in minimizing the amount of time put into the tileset.
It’s very late, but I would definitely like to pick your brain further, once I have some more questions to ask!

Instantly . . . suuuuuuuuuuure. INSTANTLY, after you’ve already painstakingly drawn every graphical element and imported them into Tilesetter in the way it wants, THEN laid out your tiles according to your level design. iNsTanT. There’s no EASY BUTTON when it comes to creating nice tile sets. (If you just want quick generic tiles for testing/debugging, just grab something free online.)
Who knows, this app could be useful for some people. Has a pleasant ui. The compositing thing is very interesting, but if I understand it then I’d definitely just do that sort of thing in Pro Motion where I have absolute power over all pixel placement and color. I have a LOT to say about these types of intermediate tools, but I’ll save it, since we’re here in the Pro Morion forum haHa.

If you need extra power in pre-fabricating full tilemaps for a game level, or even just a large portion of a game level, to then import into your engine, yes it’s true - PMNG has NO concept of wang sets or intelligent tilemapping - PMNG doesn’t identify corner tiles, edge tiles, fill tiles, etc. All tiles are merely a number to PMNG.

So, if you don’t like GM2’s tilemapping features and would rather export tilemaps from Tilesetter or Tiled, you probably should. BUUUUUT, you want to initially CREATE those tiles in PMNG, which of course is what Arachne used in the video you linked.
So most likely the only role PMNG plays in your game level creation pipeline is drawing tiles - and this is where PMNG shines.

Whatta do:
-grab Pro Motion, slap it around.
-designate yourself a template, keep it SIMPLE when just starting out.
-reskin it.
-export reskinned tile template(s) into tilemapping app/engine for tile terrain configuration.
-profit.

Here’s a simple template I made, inspired by WarCraft II. The classic 16 terrain tileset. 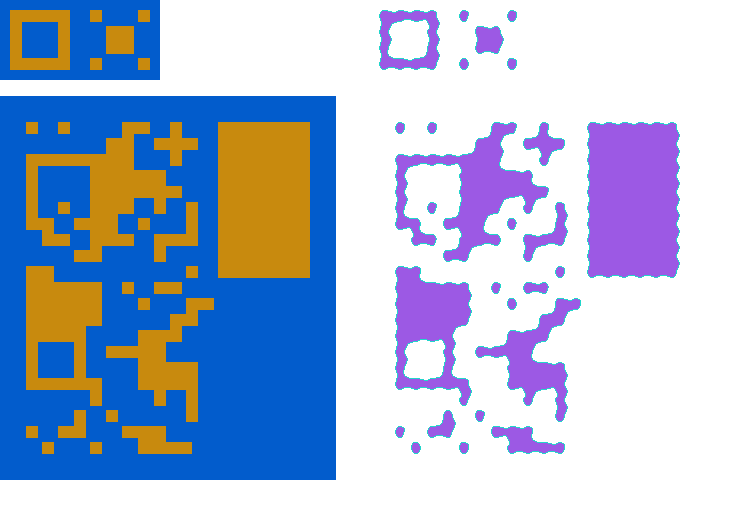 fgs5f8J.png752×512
The original basic template is actually just the chunk of crap in the top left.
Below that is a random bunch of “terrain” so you can see the tiles in action as you refine your tiles, they’ll all update in synch as you draw. You’ll quickly see where problems are, bad seams, etc.
Right side of image (purple junk) is just a hastily reskinned version of the stuff on the left.

It’s easy stuff, man. Just get in there and do it. Your only obstacle is the software learning curve.
Myself, I experienced tremendous frustration when I was learning how Pro Motion worked. Hopefully you have an easier time. Get past that obstacle and you’re golden.

You’re correct. I intend to (and have, with basic test files) use Tilesetter as a layout tool, primarily. Game Maker Studio 2 wants it’s 47-tile(blob), and 16-tile(wang) sets laid out in a certain way. I find the layout to be unintuitive, but if I don’t do it, I can’t use the autotile feature in the game engine. I plan to use Pro Motion to generate as many tiles as I feel I need to start with (right now, I use 9), and then Tilesetter to generate, and properly layout the other tiles for a complete set as required by Game Maker Studio 2, since it’s specifically designed to work with Game Maker Studio 2 (plus a couple of other game engines that I am not familiar with).