Toggle between operations on shortcuts

One of the good things i love the most about “tools” in PMNG is that i can assign a single shortcut for all 3 of the same type of tool as demonstrated here:

I understand why there are different shortcuts for each operation. But since we’re able to toggle between tools in the same group already, why not provide a way for users to group operations, so we could toggle between them too?

If i could group these two, i would just need to hit “Shift+Alt+S” again to “Shade down” instead of the current implementation where i have make up a new shortcut for it.

An example of operations i would group together to provide more insight:

^ Users could just group together their own most commonly used tools/operations. Then toggle between them all in one shortcut key.

That would be really cool ! It would even allow users to “ungroup” tools that are grouped by default, like the basic paint tool and the dot tool, I always keep on misswitching between them and it’s a bit annoying…
The best things about PM is that it is extremely customisable, making it even more customisable this way would make it even better !

Did somebody say shortcuts?!
I’ve been summoned. I regret to inform you I am here. Hi. Time for some overkill.

so @cageburner I guess what you want is for PMNG to allow you to manually set the same shortcut for multiple things, rather than take the shortcut away from the current thing a shortcut is set for and give it exclusively to the new thing you’re setting it for.
This would allow you to set your own shortcut groups. Sounds great to me - it’s just more control over shortcuts. PMNG is one of those programs you should be able to use all day and enjoy it, and more power to customize stuff just make users happier

If PMNG did this, I think it would call for two important changes to be made -

Notice how if you do this:

(remove “Line” tool’s shortcut and give it to “Polygon Line” tool)
Now only the “Polygon Line” tool is called when you press “v”. Pressing v a second time does nothing, which is what you would expect and is what the Keyboard Shortcuts dialogue is telling you will happen.
Now give Line tool back its “v” shortcut and all the sudden, pressing v multiple times once again switches between the 3 line tools, despite no expressed shortcut set for the other two. 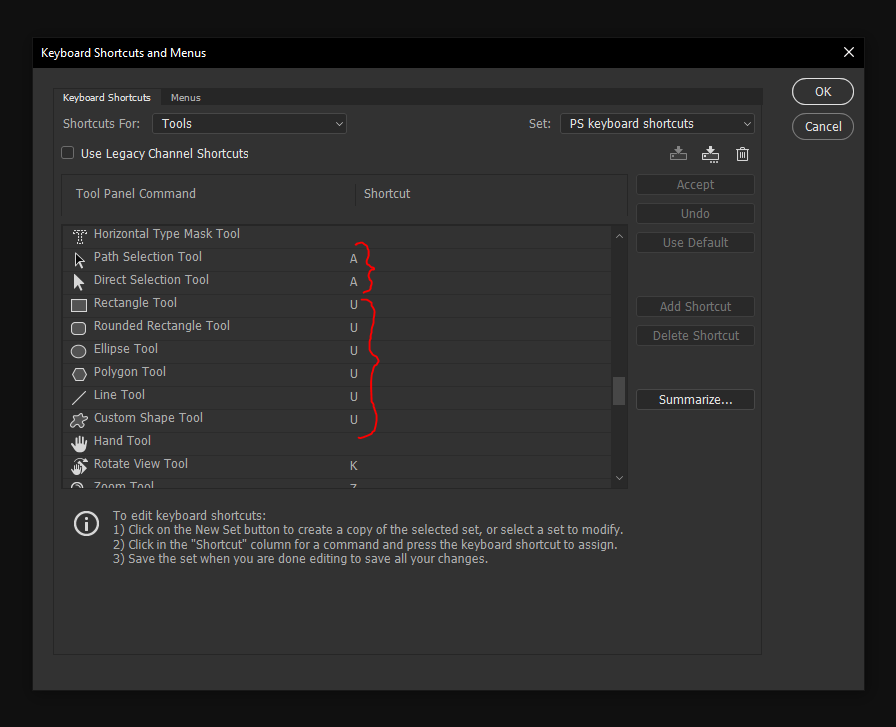 Photoshop shortcuts dialogue
PS allows multiple tools to have the same shortcut for fast switching, just mash the button 'til the cursor changes to indicate you got the right one.
Two more related PS shortcuts features I’d like to make sure Jan is aware of -

If i could group these two, i would just need to hit “Shift+Alt+S” again to “Shade down” instead of the current implementation where i have make up a new shortcut for it.

I understand where you’re coming from, but did you mean to use this specific example? Unless I’m mistaken - if you set the same shortcut for “Shade Up” and “Shade Down” you’d get stuck on the same two shades, right?

You’d just toggle up and down one shade with every press, I think. Seems like you’d need two shortcuts - one to go up and one to go down.
Let me know if I’m misunderstanding you. I think I am.

@myrmyxo I had the SAME problem. I bet most do. When I was learning PMNG, this issue was actually infuriating.
Since PMNG has these automatic hidden shortcuts, you can’t remove the shortcut to solve the problem, BUUUUT you can set a weird shortcut for it that you’ll never press by accident.
I set my Spray/Airbrush tool to ALT+CTRL+9. boom problem solved

This all sounds great to me but it’s a bunch of work. Added to my list.