I need hide cursor in some operations pixel-by-pixel,…

Hello Sundance welcome to the community. I have the solution for you.When using 3d pixel drawing on the right side there is no icon to show you where you are. Just make your image 2x the size in length than the height and set your delta to zero which is the default anyway. Draw but when you need to hide your cursor icon just look at the right side instead of the left. Although you won’t be making a three dimensional image you will have the option of viewing your work without a cursor. I hope this helps.

can you give me some more explanations about the use cases? This would help me to understand the requirement.

Works… for a mouse. I have a graphic tablet.

Is zoom-deppended. For zoom < x8 is very unclear, cursor hide pixels. For zoom > x9 is Ok.

Photoshop has this feature.
CAPSLOCK key will toggle between “Standard” and “Precise” cursors for most tools, without needing to access a menu or prefs or anything. Just press CAPS. 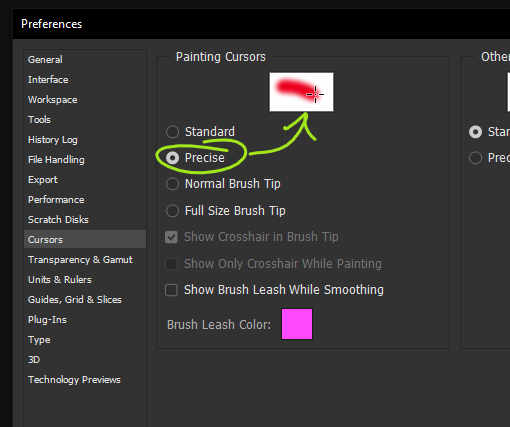 Precise cursors are just a super minimal crosshair, like pictured above.

Would be nice to have this in PMNG too, for sure.

Nice. This’ll be a good addition to PMNG for sure.

Pretty simple feature, but there is some depth to it. Here’s some points. -

So, a keyboard shortcut for fast toggling while working, BUT also a checkbox somewhere to also toggle it, right?
This way, anyone confused can just go to the checkbox and verify whether minimal cursors is off or on.
It’s my perception that some users simply don’t like being required to remember a lot of keyboard shortcuts - especially if they’re a light user.

Because Photoshop gave this function a one key shortcut (Caps Lock) by default, it has caused some confusion for newer users that didn’t know pressing Caps Lock would toggle “precise cursors”.
Partly because Caps Lock is more than just another key - it’s an operating system level toggle. So users that tab away from PS, happen to press Caps for whatever reason, then tab back to PS might find that their cursors all look different and they don’t know why.

could this feature also work in 3d so a user could see a cursor on both sides of the screen as well?