Hello,
I think it would be a good idea to make possible the importation of exterior images for example to use them as references. It is very annoying having to go out of the software to look at a reference, so I think it would be a good idea to add an “extra image” window to import an image, an animation, an image from another project etc… a bit like the preview image but different. It would make life really easier and would be really time gaining not having to change project or go out the software everytime we need to look at something. I don’t know if there is a way to do something similar now, so I out it in suggestions.
Thanks for this amazing software also !

Will add it to my list. Adding a simple window that just displays a separate image, is possible, but at the moment I have the problem that the window layout is not docking. That means you will always have to fiddle around with that window, mostly being in the way (I guess).
Loading as a separate project and switching between that is not working for you?

Thanks !
It is possible but it is time consuming to go on another project and re go to the one I am making and doesn’t allow for much percision, I prefer having the thing I draw/animate in front of my eye in a window I can move. It is also very hard to do for a non-pixel art image to use as a reference. Maybe allowing the prewiew image to display an image from another project would be somthing useful, but adding a separate window would allow for a preview and an other image to be loaded simultaneously. Also with the amazing ability to remap and hide windows it would not be that much of a problem (the window being in the way).
Also thank you a lot for the quick reply !

If I’ve understood correctly @myrmyxo, this reference image (which could be a high-res image or photograph, unrelated to pixel art) should be somehow associated to the current project — i.e., reopening the project should automatically reload the reference image(s) too.

I agree that this is a rather useful feature, especially in the sketching stage, and that it offers potential developments (e.g. allowing a preview overlaying the pixel art work image over the references image as if they were the same size, i.e. with big pixels over the high res image, using it like a tracing board of sorts).

Should the reference image(s) be included into the PMNG project file, or should the project just point to external images? The former would allow projects files to contain any reference images (photos, scanned sketches) in a single standalone file, with a size-overhead penalty (although compression might help a little, but not much for image formats that are already compressed). The latter might be problematic when passing PMNG projects to others, for PM won’t be able to locate the ref images at startup and would have to handle the error somehow.

Also, there’s the question of images paths, i.e. relative vs absolute, to keep into account.

As I said, I think this is a must-have feature for all pixel-artists who like to work with a reference image — be it a photograph or a pencil sketch. For example, I own a Inkling device by Wacom, which allows to sketch on paper with a special pen that records every stroke, allowing to later upload the sketch to the PC as an image (vector or raster); I often use these sketches as a reference for my digital artwork, for I work better with pen and pencil than the tablet (never got used to looking at screen instead of the drawing hand).

It’s kind of what I was thinking about. Maybe under the five “show windows” in the options tab there could be a “add exterior image” to maybe add this image as a separate special window you could later hide, show, move, a bit like the preview window. Doing it this way could be a good way to add multiple reference images that are not in the same image. You could then supress any “exterior image” if you don’t need it anymore.
Maybe the project could include this exterior image in the same way as it does with the palette, but without color limitations etc… Maybe you could compress these images manually if you don’t have enough space. I am not a software programmer so I don’t really know how to do it unfortunatly.
Maybe you could import as exterior “images” animations too, but this part is probably very complicated and you could import each frame too (even though it’s long to do).
Thank you to everybody for the quick and interesting replies !

I agree that this would be a useful feature so I made a quick mock-up as an example on how it could be implemented: 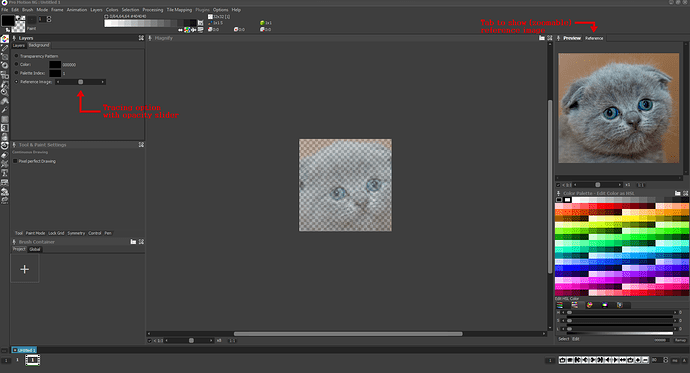 I was thinking about something like that. Maybe the exterior images could be on their own window instead of the prewiew window, so that you can view both and maybe add multiple.

It’s not in the preview window, but in an additional tab next to it (so it has it’s own window). I figured it would be easy to switch between the two.

I would really vote for Ubus suggestions. To be honest, I just registered to request exactly that feature, using an external, independent image as background image. This is something I’m looking for for years now and I even started an own painter just to support that, but it lacks because of time.

Thank you for all the detailed information. @SunSailor, the sketch is really helpful! Maybe I can add it to the Spring release.

That would be a blast! Even though the sketch is not by me, but Ubus, let me advocate the idea a bit more.

Developing game prototypes for old 8 bit machines, namely the C64, you are often alone and have to combine coding and art. Which is very doable with the limited specs of those machines, but especially the 2:1 pixel ratio in color mode makes it for not art persons hard to do a decent layout. With the ability to put a reference in the background, making retro art becomes much more easy for my kind of developers.

For example, I’m having fragments and concepts for a lovecraftian rpg here, which I can bring into reality because I’m really bad in bringing the location graphics into reality. I have sketches for them, but I am unable to get the placement within the image done in a toleratable way. Being able to roto-paint in an onion-skin like view, as in Ubus sketch, would allow me to do this. I’m not Bob Ross, but I was pretty good in connect the lines drawing…

I know what you mean. I also did lots of my C64 games all alone, like this one: https://youtu.be/K1fKVxSGOCI

By the way, you can also use the “display other project” layer effect:
https://www.cosmigo.com/promotion/docs/onlinehelp/LayerEffectSettingsDlg.htm

This would require you to load the image/animation as a separate project first. Then you can display it on the canvas of your project to draw by this “layer effect”.

Nice workaround, didn’t know that! But a bit elaborated for this, the upper way would be much easier. But will give it a try, thanks a lot!

Maybe I’m doing something wrong, but the displayed project is shown with the pixel ratio of the editing project. So, doesn’t work for me, not as intended with the suggestion at least.
Further, I’m bound to the project specs of Pro Motion NG. My idea would be an underlayer, which simply scales to the projects screen extents, regardless of bit depth or size. Maybe one can choose overscan or underscan to keep the aspect ratio of the original image.

No big deal, but yes, I made the sketch (@SunSailor thanks for clearing that up). I would like to add that it’s probably a good idea to make the reference image not only zoomable but movable as well so that the right section of the reference image is projected to the canvas. Maybe I’m stating the obvious, but I wanted to mention it just in case.

Would second that, if the usability for this is doable easily - the zoom only option would be only a combo box to add, but moveable would require some bigger beasts of UI. Wouldn’t want it, if it would make this feature prohibitive complex, as I would layout the reference image in advance anyway, otherwise be my guest

No need for a combo box or UI.The zooming can be done with the mouse wheel and the panning with a hand icon (just grabbing the image and move it), all from within the reference tab. There could also be a lock function/icon to lock the image in place after it was zoomed and moved to the right position.