I’ve been having a lot of problems with ProMotion recently. The frequency of bugs I’m experiencing is getting to the point where I’m going to have to start considering moving to different software which is a real shame as I really like ProMotion. I’ve sent a bug report not too long ago, but literally if I so much as start painting on some of the older tiles in my project, it will crash and have to restart. Not only that, but I also suffered a BSOD whilst working with ProMotion and that resulted in my Windows profile getting wiped. If there’s anything that can be done to stop these bugs from constantly happening, that would be my most hopeful scenario.

I literally triggered this bug just now by painting on a tile, that’s how bad it is. Additional information that may be helpful is that I’m working on a large tile project of 2048 x 2048 with 7 layers. Whether that sort of scale makes it more bug prone or not could be a factor, although speculation at this point. 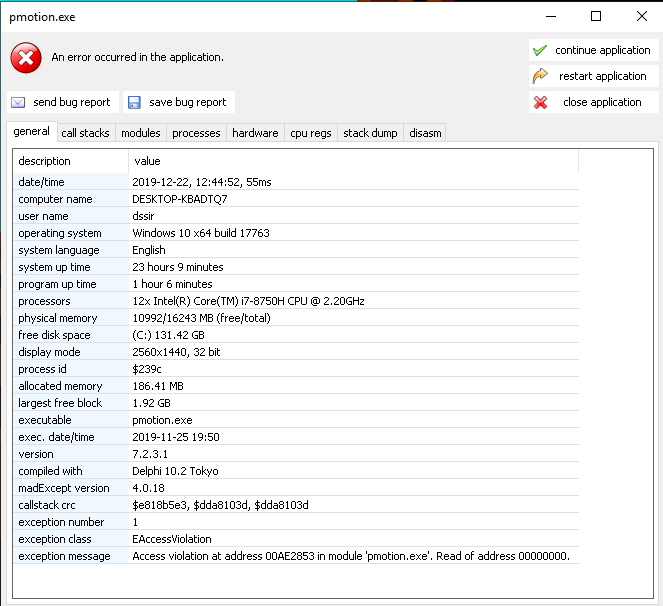 If there’s anything else that would be useful, please let me know. Thanks very much for your help!

@DSSirius, I can’t answer you regarding bugs and PMNG (only Jan can do that), but I wanted to share with you my past experience with problems due to TWAIN drivers — I basically found myself in a very similar situation to yours. See my thread:

After Windows 10 Creators Update (1703) Pro-Motion NG (v7.0.10) hangs forever at the splashscreen (x64 machine). So I can’t open PM anymore. I’ve checked the (third party) firewall settings and they are alright (it does log PM connecting to the Internet) — and it used to work fine before the update. I’ve tried reinstalling it, but nothing changed. Has anyone else experienced this problem with the Creators Update?

I had installed a scanner which prevented PM for working, causing all sorts of crashes. The conflict was solved by uninstalling the scanner driver and OCR software (good hardware, rubbish software and drivers). You might think that there should be no relation between these and PMNG, but it’s not so, due to tablet drivers support!

I can see you’re getting memory access violation errors, and you even mentioned a BSOD — which is quite strange, and I doubt could be the direct result of a PM bug (Delphi programs usually crash elegantly, with a full crash report, like the one in your screenshot). My impression is that there’s some underlying problem in your OS which needs to be addressed. You also mentioned that one of the crashes has damaged your profile, which can have devastating consequences on the OS stability.

Try checking which TWAIN drivers are present on your system, and to temporary disable them one by one and see if you still get errors and crashes on PMNG. Drivers are often the main source of conflicts, and sometimes you can solve the issue by uninstalling them and reinstalling from scratch. Also, if you’ve installed old software (e.g. from the XP era) that handle TWAIN and scanner devices, this might a possible cause of crashes (especially if these programs launch a service at Windows startup, to monitor scanners peripherals).

@tajmone thanks very much for the response. I’m not sure what the cause of the bsod was to be fair. It happened as I was using promotion but probably wasn’t linked. I’ve completely reinstalled the OS now but it still crashes when I try to modify some of the older tiles in my current project. Seems like some kind of error with memory assignment perhaps. Don’t know much about Delphi so can’t really help but I am working on a very large project which contains literally all my games tiles. It’s only some of the oldest tiles I made in the project that cause the program to crash.

Please use the latest version (7.2.5) then with your tile map project please disable “Sync mode” and then re-enable it. This should fix the issue but might lead to some new tiles in the tile set.